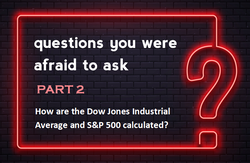 Questions You Were Afraid to Ask #2: Why is the price of the Dow so much higher than the S&P 500? 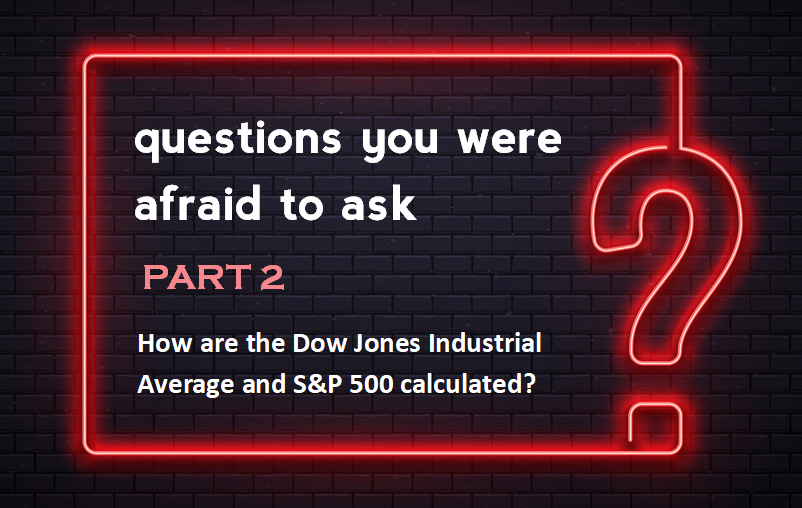 I recently started a new series of blog posts called “Questions You Were Afraid to Ask.” Each month, we will look at a common question that many investors have but feel uncomfortable asking. Because, after all, when it comes to your finances, there’s no such thing as a bad question!

In our first post, we looked at the difference between the Dow, S&P 500, and NASDAQ indices. This month, let’s discuss a related question:

Questions You Were Afraid to Ask #2: Why is the price of the Dow so much higher than the S&P 500?

If you do a Google search for “S&P 500.” The first result will show the current price of the index. Make a note of the number.

Next, search for “Dow Jones.”

Notice how much higher it is? As in, tens of thousands of dollars higher.

This is why many investors often wonder why the Dow’s total price is so much higher than the S&P, even though the latter contains hundreds more companies. The answer has to do with how these two indices are calculated. (Brace yourself because we’re about to do some math.)

The Dow, for example, is calculated by taking the 30 stocks in the average, adding up their prices, and then dividing the total by the “Dow Divisor.” Early in the Dow’s history, this divisor was simply the number of companies within the average. Today, the divisor is adjusted regularly to factor in changes to
the list of companies, stock splits, and other events that could have an impact on the overall average.

As of this writing, the Dow Divisor is 0.15172752595384.1 In effect, calculating the Dow’s value essentially means multiplying the sum of each company’s price by roughly 6.5. (Because the divisor is less than one means it technically functions as a multiplier.) Every $1 change in price to a particular
stock within the Dow equates to a movement of 6.59 points on the Dow. (1 divided by 0.15172752595384.) I know that probably seems counterintuitive, but hey, that’s math!

This multiplication effect is partly why the Dow’s value is so much higher than the S&P 500’s. You see, even though the S&P contains hundreds more companies, its overall price is lower because of how it’s weighted. Now, take another deep breath before we plunge into the wild world of weighted vs.
unweighted indices…and yes, do a little more math.

In an unweighted index, every company has the same impact on the overall index, no matter its price or how many shares are available. The price of the index is determined by simply adding up every company’s stock price, then dividing by the total number of companies in the index. For example, imagine an unweighted index containing only three companies. If Company A went up 15%, Company B went up 10%, and Company C went up 5%, the index itself would be up 10%. (15+10+5=30, and 30 divided by 3 equals 10.)

With me so far?

Most indices don’t work like this, however. That’s because not all companies are equal. Some are worth much more than others or have a much higher volume of shares available to buy or sell. For that reason, a simple mean average is a pretty unnuanced way of looking at the overall index. For this reason, most indices are weighted. This means the average is calculated by putting more importance – or weight – on some numbers than others. It’s a more accurate way of looking at data.

The S&P is a capitalization-weighted index. (The Dow, by contrast, is a much simpler price-weighted index.) That means each company is weighted according to its market capitalization – the company’s share price multiplied by the number of shares available to buy or sell. As you know, some companies are simply bigger than others. Typically, this means they have more outstanding shares, which means a higher market capitalization and more weight within the S&P 500. The result? The price movement of
these companies has a much bigger impact on the S&P than that of smaller companies.

For these reasons, the divisor that the S&P 500 uses is much higher than for the Dow. In fact, it’s currently higher than 8,000.2 And the equation the S&P uses is much more complex. (I’ll spare you the algebra.) This is all done to keep the value of the index down to a more manageable level, and to prevent
the price movement of a few companies from having an even bigger impact on the overall index than they already do. Hence, as of this writing, the Dow is currently over 35,000, while the S&P is around 4,675.

Whew! That was a lot of information to cover in one blog post, wasn’t it? This has also been a much more technical post than I usually try to write. But I hope it gave you a glimpse into the numbers you see reported every day in the news. That way, when the media says, “The Dow finished at X today,” or, “The S&P 500 opened at Y”, you’ll have a better understanding of what that actually means. Because, after all, that’s a big part of what life is all about, isn’t it? Increasing our understanding of how the world works – and why.

Next month, we’ll cover a simpler – but broader – topic: The difference between stocks, bonds, funds, and other types of investments.